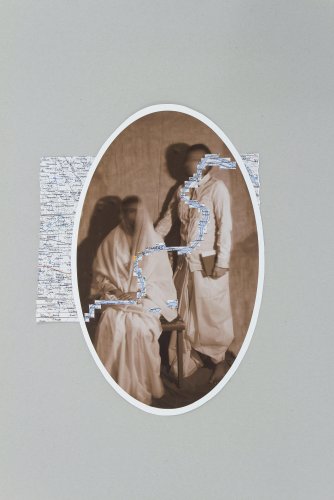 Arpita Akhanda’s practice emerges from the idea of looking at the body as a memory collector. She is interested in exploring lived memories, passed on memories and created memories.

The exhibition শরীর | Körper : The memory collector, shows her works done during the four months residency at Gästeatelier Krone.

The exhibition is divided into two sections, 240 hours and more…

240 hours– a series of photo-performance, photographs and texts. During the 10 days of quarantine.she looks at her body as a living object surrounded by the objects that constituted the character of the house. Spending 240 hours inside her studio apartment in an unknown city/country she generated a relationship with the city through the sounds from the windows and the skylight.

These series of works she developed from her experiences of exploring and negotiating the idea of self/identity/home in the unknown city, after the quarantine period.

Body of water is a series of photo-performance and paper weavings developed from a poem that she wrote during her regular visit to the river Aare. It attempts to generate a relationship between recreated characters from past/memory and the water bodies these characters had to cross in search of home, inspired from her family history of transit during and post partition and her own experiences of migration. Here she tries to weave the biological, historical, mythological and physiological bond between water and body. This work travels between the idea of the water body as a carrier of both migration flow and settlement.

Body is home, a larger than life size weaving of her self portrait taken in the landscape of Aarau along with the maps of Aarau which she used to locate her position and travel through the city trying to understand the idea of home in temporary settlements.

The living scar, is a video of two scars that she had tattooed on her body in response to the date 17th August, living far from her motherland. Through this performance, the artist identifies her body with dissected lands and the marks as a continuity of scars of living history in her country. Her body not only carries these two historical marks/scars, but now she lives within these two scars.

Arpita Akhanda, Born (1992) and brought up in a family of artists who migrated from Bangladesh during partition and moved through many locations in India before settling in Cuttack, Odisha. Presently she works across mediums that include paper weavings, performance, photography, installation, drawing, and video. She explores paper weaving as a process to weave the warp of memories with the weft of present situations to create a fabric that questions identity and existence. And the two layers, containing the past and the present, get interwoven to construct a pixelated, broken, hidden, dissected, and blurred visual language. Arpita looks at this language as a metaphor to speak for the forgotten and lost narratives. She considers her own body as a site for exploring the fragility and strength of the human condition under duress of conflict within contemporary society. Her practice emerges from the idea of looking at the body as a memory collector.